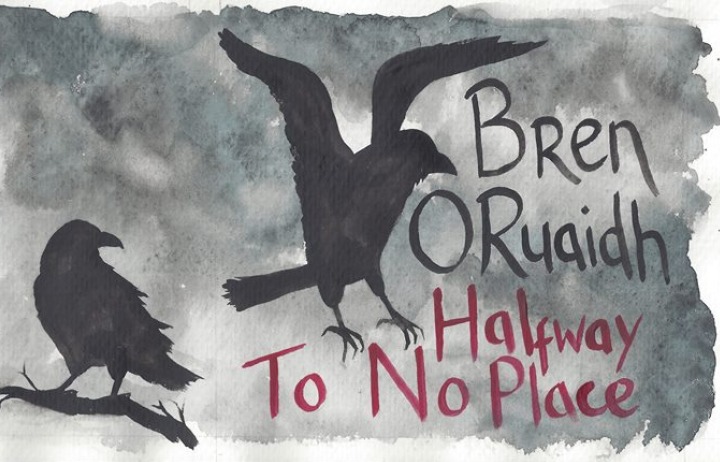 An album of minimalist sonic scope, Halfway To NoPlace concentrates on performance and character to convey the swaying, free-form nature of O Ruaidh’s songwriting.

Opening with the manic rhythmic aesthetic of ‘Dance On The Moon’, the tone and overall feel of the L.P is established within the song’s frantically weaving finale. Once this organic abandon has been set, the album begins to expand upon the songwriter’s meandering lyricism.

Central to the thematic and sonic elements of the record, songs such as ‘Fruit On The Vine’ and ‘I Woke Up This Morning’ translate the folk-blues driven sound of Halfway To NoPlace. Bold, brash instrumentation suddenly appear and just as suddenly disappear within the recording’s soundscape giving the L.P a much-needed sense of aspect and progression.

In context, what Bren O Ruaidh’s songwriting style and approach is trying to achieve can be a difficult task to pull-off. The manic, rough and ready sound of the album coupled with the artist’s distinct lyrical musings could have resulted in a record that was far too interested in being quirky than actually having anything to say artistically.

And while O Ruaidh does veer off the path on occasion (closing track ‘Tom Waits’ feels unnecessary) songs such as ‘Bright Green Eyes’ showcase how these elements can work together to create something singular and heartfelt.

Halfway To NoPlace is an undeniably individualistic album that does provide moments of pure joy. And while the piece is not without its flaws, there is enough character and verve to how the songs are performed and presented to result in a promising début release from the artist, whose uncompromising approach must be admired.

Halfway To NoPlace by Bren O Ruaidh is out now.