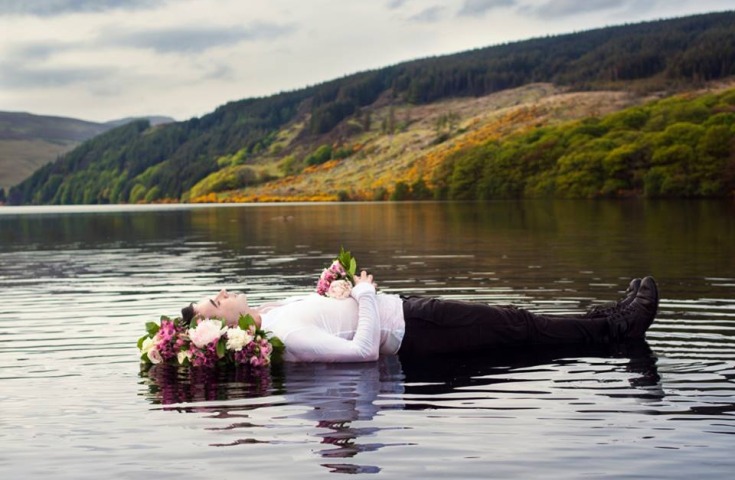 The Late David Turpin will play a pair of shows at the Cobalt Café this Friday (May 16th) and Saturday (May 17th) as part of the Dublin Gay Theatre Festival. Turpin took the time to talk to theLastMixedTape’s Stephen White ahead of the events to speak about his song-writing, live performance and influences.

You are currently in rehearsals for your performances at the Cobalt Café this weekend. What can people expect from the show?

It’s a much smaller venue than I usually play so I’m doing it with a vocal trio, live electronics and a different special guest on the first day and the second day. On Friday Cathy Davey will be joining me  and on Saturday it will be Martin McCann. That will be interesting, I don’t think I ever actually had a male special guest singer before so that will be a change. I mean Karl Knuttel sometimes sings with me, but always sings a couple of songs but parachuting someone in for one song is different.

You seem to carefully choose your moments for gigs instead of embarking on long tour schedules, often playing theatre festivals like this one of the Fringe where you can construct a show for that particular event. What is it about this approach that appeals to you?

I do really enjoy playing in music venues, especially doing support for other artists but I guess the music that I make lends itself to a more unorthodox presentation. So when you get to do it in a theatrical context one of the things that happens is that when your concert is positioned as a piece of theatre your audience suspends some of the things they’d expect from a straight forward gig. And I like to do something that is a little bit contrary to what people expect from a concert.

You said before the gig will see you working with a smaller group of musicians. How does this live performance approach differ from your studio work?

The album (We Belong Dead) itself was a massive thing with strings and choirs on it, I think their’s one song that had 150 vocal tracks alone. So you try to pare things back to there essential properties, but synthesis can do a lot of wonderful things in that respect.

I always like that when I perform that the voice is at the front, my own voice is something that I think people either really like or really hate, and that’s fine (laughs) but I try to put it to the front of the show so it is what it is. I also love the mesh of human voices together, when you see a band play with a lot of instruments together that can work but it’s not radically different from what you hear on a record. But being in a room with a lot of people who are singing in harmony can be very moving, very unnerving and that’s where I like to start from when I building a show.

Is starting with a vocal idea similar to how you begin to write a song in the first place?

Usually it starts with a word, a phrase or an image and it grows out of that. But sometimes it can come from the feel of the timbre of a voice. One of the things that is different from how I work is that we are in a culture of authenticity that suggests that you have to write every note on your record, you have to sing it all yourself and it has to be all about you, and I’ve just never felt that.

One of the things I find most exciting about making a record is writing something for someone else to sing. I think the reason why we make any kind of art, we paint, we write, we make music is that we want to go beyond our limitations, even of our bodies, work and daily lives. And one way to do that is to write music for someone else to sing because that take you out of your body.

It’s in an outer body experience just like when you hear the great interpretive singers like Billie Holiday who use songs written by other people, but take that through their body and turn it into something that’s a liberation for them and for the song.

In regards to the transformative process your current album We Belong Dead itself explores animalistic metamorphosis. Is that something that influenced for you?

I think that one of the wonderful things about making a record in a studio is that transformative potential. People can be very snooty about things like when you use Melodyne or a vocoder on your voice, to me there almost magical things because they let you hear yourself in a different way by interacting with technology to make something new.

And thematically I’m very into transformation. I think a lot of people have the experience of not being satisfied in their body and feeling betrayed by it, you look in the mirror and it’s not what you would like. It’s natural to feel that way that’s how I feel, and by making music you get to construct yourself in a way that you never get to in life.

And I’m also very interested in animals and the way that people talk about animals in poetry and in music. They are very often written as a symbol for sexual liberation, even like Duran Duran ‘Hungry Like the Wolf’. When people want to sing about wildness or freedom they often reach for animal imagery. But I think that being an animal in this world is not a position of empowerment, it’s a difficult world in which to be an animal so for me animal imagery has a lot to do with the feeling of not having a voice, not being welcome to speak, people not wanting to hear your or acknowledge you. That for me is what an animal’s experience is, we don’t like to acknowledge the thoughts and feelings and experiences of animals because we eat them. When you make a record you make a world, in this case a fantasy of what the world might be like if we had we had become extinct and what kind of place it would be like.

Speaking about that world you create when making a record and given the atmosphere you created at your previous shows, how important is it to you to translate that feeling live?

What I was shooting for with the record was a kind of mysterious atmosphere, where not everything was explicable and would have a dream-like quality wherein it would flick from one thing to another suddenly but it’s right and you can’t say why. I think that’s something that music can specifically do that much less common in narrative cinema. So when I perform it I like it to have a kind of cult or incantatory feel (laughs) but with that there has to be a tongue in check element to it.

Do you think it’s important to have that tongue in check element to it?

(laughs) I’m acutely aware of my ridiculousness and it’s very important to be aware it. A lot the musicians that I really like, like Kate Bush for instance, I find it very hard to believe that Kate Bush isn’t aware that there is slightly you might call ridiculousness to some of what she does like the “wishy-washy washing machine” song. I think that can be a beautiful thing. We’re all ridiculous, our feelings and ideas can appear to be ridiculous to others and that’s the nature of being an individual. So many people are worried about concealing it, I don’t think you have anything to fear to letting your ridiculousness out. Also on a record or a in show you’re creating an imaginary world, and the more imagination that goes into it, the more unusual it is, surely the better it is.

Tickets to see the Late David Turpin at the Colbalt Cafe on May 16th and 17th are priced at €15 and are on sale now. For more information visit gaytheatre.ie.