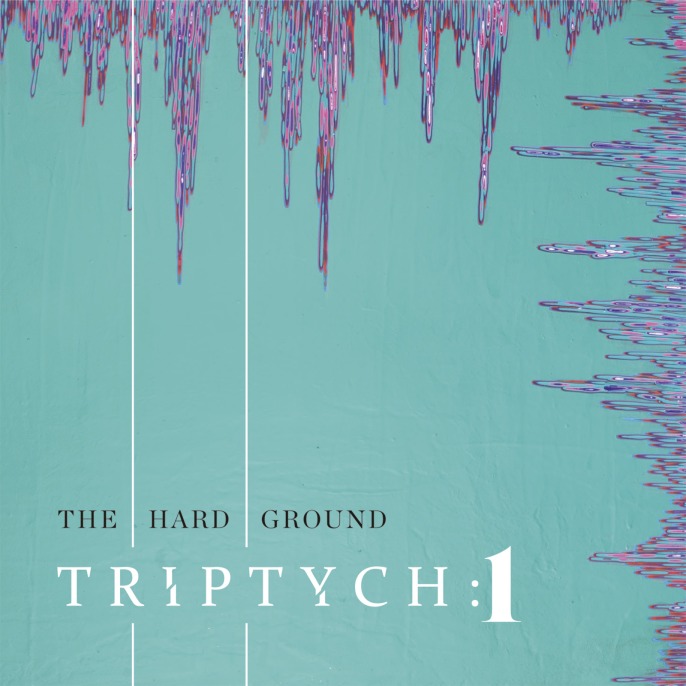 The Hard Ground make a captivating return with Triptych: One the first in a trilogy of E.P releases that will culminate in the group’s sophomore album, entitled Triptych.

With a sudden pounding of percussion and harmonic screech the Hard Ground open Triptych: One with the rattle and hum aesthetic of ‘Belles and Beaux’. Progressing both rhythmically and melodically the short sharp shifts in tone that form the recording’s core propel the brooding atmosphere, giving the E.P a sense of space to move sonically. Within this slow-burning introduction the gradually opening scope of the record is alluded to via brilliant flourishes of musicality that recur throughout.

Tracks such as ‘Ashes’ and the finale ‘Spies’ give the E.P a sense of aspect dynamically, with the palpable rumble of ‘Ashes’ giving a harder texture to Triptych: One’s overall sound while ‘Spies’ juxtaposes this with a softer more reverberant tone that washes over the listener.

These recordings also give aspect to the E.P’s depth of field, with the former giving a more up-close aggressive feel, while the latter provides a sense of vastness and space through echoing, gently textured moments.

However, it is with ‘Two by Two’ that the Hard Ground most effectively realise the large-scale production of Triptych: One. Fully opening the record’s sonic scope, the vast howling textures resonate within the turbulent aesthetic of the song’s closing bars, building to a breathtaking crescendo.

Above this sits the vocal, wherein the emotional weight is captured. Moving from hushed, subtle nuances to powerful choruses supported by tapestries of backing harmonies the essence of the song is expressed both sonically and emotionally. The heart and soul of Triptych: One is found in ‘Two by Two’.

The immense body of sound that populates Triptych: One is simply enthralling. The sonic heft, turbulent landscapes and tonal plangency of the record encapsulate a broad spectrum of sound resulting in an E.P that reveals hidden treasures with each listen, and as the fading beat of percussion recedes into the ambient hiss of the recording during the final moments of ‘Spies’ it becomes hard to resist pressing play once more. Stunning.

Triptych: One by the Hard Ground is due for release on May 16th.

6 comments on “The Hard Ground – Triptych: One”