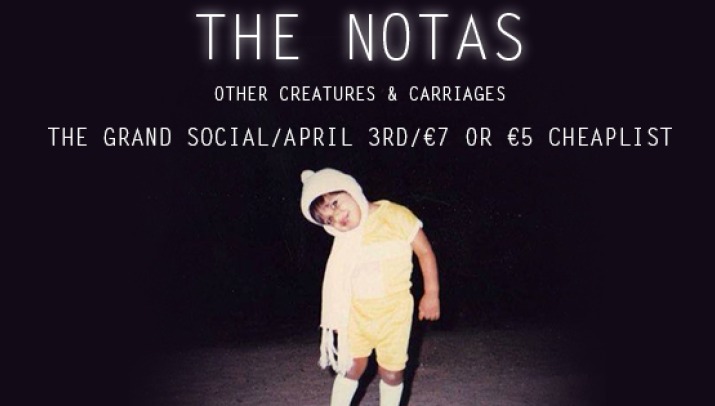 Indie outfit the Notas have announced their first headline show at the Grand Social in Dublin on Thursday, April 3rd.

The six-piece will bring their unique take on the indie and alternative-rock genres to the stage at the Dublin venue next month, with support coming from Other Creatures and experimental-electro duo Carriages. The show will be presented by Donut Promotions.

Following the release of the Nota’s critically acclaimed sophomore E.P Creatures of the Night last year, featuring the syncopated beauty of ‘Vvalentina’ and arpeggiated brilliance of ‘ROSEMARY’, the group have continued to evolve and develop their stylistic sound which resulted in several festival stealing performances including Castlepalooza 2013.

With the Nota’s atmospheric sound and full-scale production aesthetic the group’s first headline show at the Grand Social will be a unique opportunity to capture the band live within the venue’s intimate surroundings.

Tickets for the Notas at the Grand Social on April 3rd are priced at €7 (on the night) or €5 (via the cheap list on Facebook). For more information visit the Facebook event page.