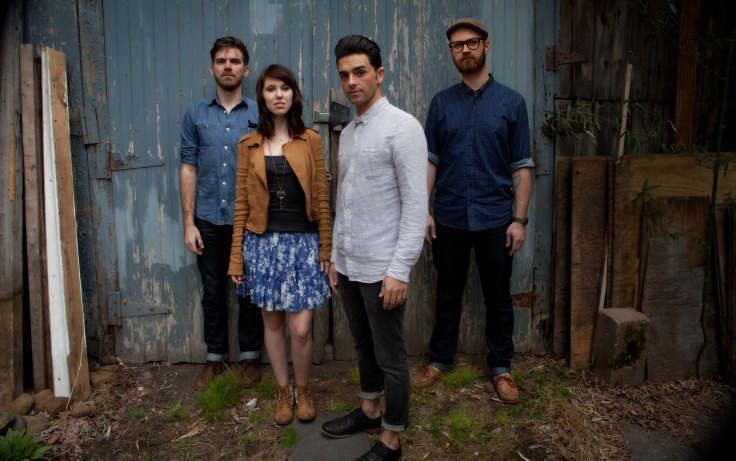 Moving from your previous work with Dashboard Confessional what inspired you to move into the more folk driven sound of Twin Forks?

The work I did with Dashboard Confessional was predominantly electric guitar based, the indie-rock sound we had kind of forced me to write a certain way and moved me from the music that was really inspiring me. But when I wrote solo songs I always gravitated towards the acoustic. I just love the sound of it, there’s a real power to the overtones that come from the instrument.

I’d sit around at home or at parties playing on acoustic, mainly finger-picking folk styled music because that’s what I wanted to play. I remember this one time when I was doing this, and Jonathan (Clark) who would eventually end up playing bass in Twin Forks was there. He’s an amazing musician, the kind of person who could play a kazoo and get something out of it, but he’s also one of these people who just understands music and the people who play it, he’s very insightful. He came up to me while I was playing, and said “Chris, why are you afraid to play the music that you love”. That really rang a bell with me, and began what would become Twin Forks.

Did your song writing change once you began to write and play the music that you love?

I’ve always had a specific process. I like to introduce rules to how I write, I call them the ‘New Rules’ and I change them up every couple of years or so. For the last while going into Twin Forks I had listed two words, ‘Love’ and ‘Heart’, as ones to be avoided in my lyrics. The challenge was to find new and different ways to translate these words and the emotions behind them, because at the time they just didn’t resonate with me any more.

When I began to write for Twin Forks I changed the rules again, and lifted the ban on those terms and it gave them a new meaning for me. For me song writing is always about the process behind it and how it affects the music you write. When I listen to someone like Bruno Mars, I can tell that he really understands the craft of song writing and where each part fits. I really wish I was like that. I’ve just been lucky that the practice I’ve put behind my work has led to songs which resonates with other people, outside of myself and the band.

Do you think that you are hard on yourself as song writer?

Not when I’m in the right frame of mind. It takes a lot of constant practice for me. Sometimes I will write more than one song a day, but it’s when I force myself to finish that song that really poses the challenge. I’m fearless when it comes to playing my new tracks for the band or other people, it doesn’t bother me if they tell me that it’s terrible or that’s excellent. It’s when someone says “I want to play on that”, that’s when I know it works. Because the really great musicians only want to play on really great songs, that how you now that you’re onto something that works. That sort of positivity finds its way into the music.

Do you think that positive atmosphere made it easier for you to write songs for the Twin Forks album than previous projects?

It felt like the onus wasn’t on me as much as it had been with Dashboard or the other bands I’d written with before. One of the earlier bands I had worked with was real math-rock and had a kind of hodge-podge approach to writing, where parts of songs were written separately and sometimes made to fit, even if they were in the wrong key but I was supposed to be different and quirky to we made it work.

With Dashboard, I had a more set template to work with. The guys in the band were really sensitive to that and left me guide the song writing more. I actually just found a note-book from one of the guys which was filled with pages on this one song, it has all the different possible ways and styles the song could end up being played written down and organized in it. That’s how prepared and dedicated the band was to understanding what it was I was trying to do.

But with Twin Forks, the collaboration was more real-time. I had a definite identity in mind for the band and the guys knew that. I remember John saying one day that “Chris has this figured out and we should let it happen, and work on this together”.

I would work on a new song and record a rough demo, then give it to the band. We’d all go out and drive around listening to it. When we got back to the studio we’d all gather around the microphones and record it, not worrying about bleed or anything like that. It was exciting, and we were just trying to capture that mood.

You can hear us laughing and whistling during some of the tracks. I won’t say which song it is but if you’re wearing a good set of headphones you’ll hear one moment in the album where the mics catch that atmosphere. John and Ben where doing something really unexpected during recording, and it made me laugh so I gave out a really sharp whistle that was probably picked up in a drum mic, then just after that you hear this really sweet laugh from Suzie. It’s moments like that give the record the throw back feel we were going for.